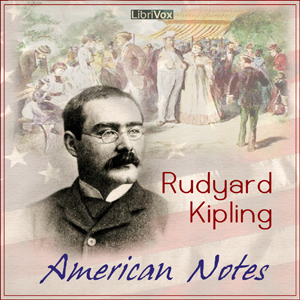 In American Notes, Rudyard Kipling, the Nobel Prize-winning author of the Jungle Book, visits the USA. As the travel-diary of an Anglo-Indian Imperialist visiting the USA, these American Notes offer an interesting view of America in the 1880s.

Kipling affects a wide-eyed innocence, and expresses astonishment at features of American life that differ from his own, not least the freedom (and attraction) of American women. However, he scorns the political machines that made a mockery of American democracy, and while exhibiting the racist attitudes that made him controversial in the 20th century concludes "It is not good to be a negro in the land of the free and the home of the brave."

G. A. England of Harvard University (letter to The New York Times 10/11/1902) wrote: "To the American temperament, the gentleman who throws stones while himself living in a glass house cannot fail to be amusing; the more so if, as in Mr Kipling's case, he appears to be in a state of maiden innocence regarding the structure of his own domicile."

Summary by Tim Bulkeley with Quotations from the Gutenberg edition of American Notes and the online version of The New York Times of October 11th 1902.

Reviewer: gaboora - favoritefavoritefavoritefavoritefavorite - May 12, 2020
Subject: Americans Sort of Made Fun Of
The little bit of Kipling that I had read up until now I did not like. But I found myself liking this book. At least once it is irreverent: in a comment about Adam in Genesis. Of course I absolutely reprehend that. But mainly the book is abrasive in a humorous way, which tone is hard not to like. Kipling begins by teasing San Francisco for its ‘cobblestones in the fashion of year 1,’ ends by criticizing ‘pimply young reprobates’ in Buffalo, and the book is full of wit in between. By knocking America, he gives an apologia for England. That England is more civilized and proper than America is—this, I suppose, is the thesis. He does have good things to say, however, about the country on the end of his ribbing. These things mainly involve the fortitude and loveliness of American women. As for the reader: his voice is deep; his intoning is blameless; and his overall performance is beyond reproach.

Reviewer: Jennabar - favoritefavoritefavoritefavoritefavorite - April 27, 2010
Subject: Excellant
This is an excellent reading of a very interesting book. As an American, I find Kipling's views on America very amusing. It is enlightening to hear the perspective of one not raised in the midst of this country. The reader has a sort of dead pan which works very well with this piece; well worth the listen!

Uploaded by librivoxbooks on February 3, 2008